The much awaited winter forecasts are coming in from various local forecasters. As best we can determine, these are the various forecasts to date:

KSTP's Dave Dahl released his forecast on October 27 and predicts 75 inches of snow for the Twin Cities. Even better, Dave laid out his snowfall projection by month. We're inclined to think he nailed the October snowfall forecast. 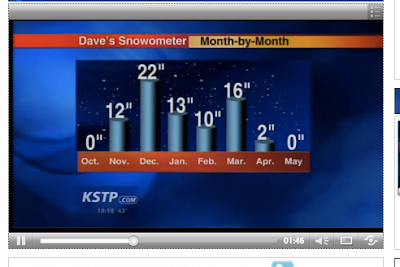 MPR's Paul Huttner weighed in with his forecast on October 26. He forecasts average temperatures for the December through February period and a seasonal snowfall total between 50 and 60 inches.

The Star Tribune's Paul Douglas calls for winter temperatures to average 3 degrees cooler than normal and snowfall to total between 50 and 55 inches.

As a group, the average snowfall prediction of those taking the Minnesota Forecaster poll was
61.9 inches. Please take the poll at right to tally your guess as to how winter's temperatures will fare.

Minnesota Forecaster, whose predictions are based on the amount of shedding experienced by the family dog, predicts temperatures averaging .6 degrees above normal with seasonal snowfall of 43.1 inches breaking down as follows: October: 0, November: 4.1, December: 10.7, January: 9.2, February: 4.1, March: 11.2 inches, April: 3.8.

Readers, are there any other forecasts out there that we may have missed?
Posted by Bill at 12:44 AM 21 comments:

A Statistician Weighs In On the Upcoming Twin Cities Winter

One of TMF’s followers, Rigil Kent, is a weather enthusiast and statistician. He provided a prediction of winter snowfall and temperatures based purely on statistical analysis and the historical effect of La Ninas. He has compiled datasets over the years from weather records from a variety of different sources, including NWS, Accuweather, etc
“I thought I would try a systematic approach to this,” says Rigil. “I took the average snowfall of the La Nina winters, plus a random correction taken from the statistical distribution that best approximates winter snowfall in the Twin Cities since records started.” Rigil came up with a result of 62.1 inches of snow.
We asked Rigil to take a shot at predicting temperatures as well. “Temperatures are a bit trickier as the official NWS means are updated every 30 years or so. To keep things simple, I used the current averages and looked at the discrepancies observed during La Nina winters plus some random corrections.”
The results were enough to send chills down the spine of even the most hardy winter Minnesotans. Based on the statistics, Rigil predicts February and March to be far colder than average with December, January and April temps running slightly below normal. Here are his monthly temperature predictions for November to April:

Rigil’s quick to point out that his model is a purely statistical one and does not take into account any meteorological variables for now. He’s currently working on a model to predict snowfall for the Twin Cities year by year that takes into consideration several indices like ENSO (La Nina/El Nino), the Pacific Decadal Oscillation (PDO), the NAO, etc.”
Weather/statistical geeks may be interested in attending an upcoming lecture at the University of Minnesota. The lecture, conducted by Professor Adrian E. Rafferty from the University of Washington, is titled Probabilistic Weather Forecasting Using Ensemble Bayesian Model Averaging and takes place on Thursday, Oct. 27 at Ford Hall 115 at 3 p.m. The lecture will look at ways to post process numerical model ensembles (GFS, etc.) to obtain better calibration. As Rigil points out, “To a Bayesian statistician with a passion for weather like myself, you really can’t ask for more.”
A reminder that you can follow The Minnesota Forecaster on Facebook and Twitter.

What Will Winter Bring?

The answer, of course, is how the heck do we really know? Ah, but that won't keep the weather-obsessed populace that is Minneapolis/St. Paul from wondering. And with that, we were wondering what your thoughts were regarding the upcoming winter. Please take the poll at the right.

What does the NWS say about this winter?
Given the talk of another La Nina forming -- and Accuweather's already infamous prediction of another brutal winter for these parts -- we were curious to know exactly how strong the correlation is between La Nina and a cold, snowy winter for Minnesota. We checked with the Twin Cities branch of the National Weather Service and this is what they told us:

It is true that there are signs of a La Nina returning for this winter out in the equatorial Pacific. About 70-80% of the time there is a La Nina, temperatures in MN for the Dec/Jan/Feb 3-month season are below normal (with about 60-70% of those winters experiencing above-normal snowfall). The Climate Prediction Center shows the historical correlation to the ENSO phase and temp/precip patterns across the US at this site.

Our own guess -- based on gut, not science -- is for average temperatures, slightly below normal snowfall and one to two short tropical getaways.

What are your gut thoughts on the winter ahead. Will it take a while to get going? Will it start with a vengeance? Will it feel like a St. Louis winter?
Posted by Bill at 10:32 AM 12 comments: