The year without a spring seems destined to continue that way. Here are the forecast high temps for Sunday from a variety of weather outlets (collected Friday evening). Interestingly, the National Weather Service forecast is considerably colder than other outlets.

So Chicago's weather isn't quite the same as the Twin Cities weather, but we thought this was an interesting assessment, one that suggests lasting warm weather is nowhere to be seen in the immediate future. This is from forecaster Tom Skilling's (Chicago) Facebook page:

The National Weather Service's Climate Prediction Center (CPC) produces this graphic each day. It's serves as a cold weather indicator for Chi and is produced from the output of the Service's GFS model. When this index (the North Atlantic Oscillation Index or "NAO") goes negative, the odds of cool weather are increased here. It's produced by comparing pressures in Iceland with those in Portugal. The presence of the warm air pool aloft over Greenland and the North Atlantic drives this index into its negative (or cold) phase.

Weathercaster-go-round (and Slush for Wednesday?)

Chikage Windler announced tonight that she's leaving for Indianapolis. Next Sunday will be the last day Chikage graces the KSTP airwaves. Chikage leaves big social media shoes to fill as she was a real trailblazer among local television weathercasters. This follows relatively quickly on the heels of Erik Maitland's leaving FOX 9. Watch his curtain call here.

"Models may be exaggerating the risk of slushy snow at the tail-end of the storm Wednesday, but I wouldn't rule anything out at this point. Let's see a few more model runs, but know that rain may mix with a little wet snow Wednesday morning with a potential for a couple inches of slush, especially north/west of the metro."

Check back for forecaster grades Wednesday morning after you dig out from the big storm. (Yes, sarcasm reigns this time of year when there's snow talk.)
Posted by Bill at 1:51 PM 30 comments:

Most forecasters saw a repeat of Friday night's storm. The National Weather Service and the Strib appear to be outliers as of Monday evening.  Check out our spreadsheet to see the progressive forecasts leading up to Tuesday evening.

Here are a few select scans that tell some of the story: 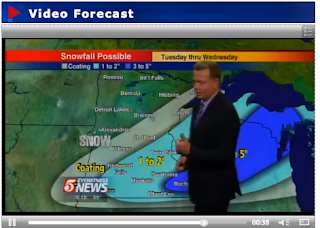 As of Sunday night, there is some consensus among local forecasters that a significant snow event (for April, anyway) is on the way. Check out our spreadsheet to see the progressive forecasts leading up to Tuesday evening.
The most striking prediction to us was the confidence displayed by normally conservative KARE11 in predicting a significant snow event. WCCO continues to show models with projected snow amounts that they don't really agree with, which doesn't make any sense to us considering theirs is a visual medium and some people watch with the sound down.


(Midday update)
We'll provide a forecaster recap later tonight for the possible snowstorm Tuesday night and Wednesday. At this juncture, there appears to be considerable variance in what forecasters are thinking. KSTP is poo pooing any chance of real snow (instead forecasting primarily rain) while others such as  KARE (per tweet from Sven Sundgaard) see either snow or no precip at all.

Here are a few comments we found on Sunday morning:

@svensundgaard
Biting my finger nails... lots of possibilities with this Tuesday storm, could be lots of snow, or does it head south and we're just cold?

@novakweather
I will not be surprised if a foot or more of snow falls over so. and/or central MN by noon Wed.

Steve Frazier, KSTP, 6 a.m. update
"I think the accumulating snow is pretty much behind us. Some rain showers on Tuesday and Wednesday that could get a little flaky from time to time."

Strib Weather Column
The models agree on the timing of the next storms (late Tuesday through midday Wednesday), but not the amounts. The range: 4-14", give or take a foot. Throw out the highest and lowest values and you still wind up with a midrange prediction in the 4"+ range. We'll see. It's still (very) early to be attaching inch-amounts to the forecast. Could it be "plowable"? Absolutely.
Posted by Bill at 11:46 AM 52 comments:

Before thoughts quickly move to the next possible slushstorm possibly coming through the Twin Cities, here are a few passing thoughts on forecaster performance for the recent storm.

For the most part, it seems that snow at this time of year is essentially white rain. So a missed forecast really isn't as important as when accumulating snow tends to wreak havoc on traffic, etc. Another thing that's interesting about forecasting this time of the year, is that forecasters seem to "poo poo" models that suggest snow. Some of the television forecasters really seem to have a "let's not talk about it for now" attitude, partly because talking about snow at this point of the season seems to distasteful and partly because climatology suggests that serious snow this late in the year is so unlikely. Still, it feels as if we're in a period -- including the upcoming week -- where forecasters are underestimating the possibilities of snow.

In the final analysis, most forecasts on Friday evening were for 1 to 2 inches of slushy snow, which ultimately came to fruition (with several exceptions in the far south metro). However, it seems that virtually all forecasters expected a considerable period of rain at the onset and an overnight change to snow, neither of which happened.

KSTP and KARE were off on this forecast from Wednesday night, both predicting all or the bulk of the precip to be rain. The Strib, on the other hand, seemed to be the most persistent in predicting accumulations. Other general observations on overall forecaster performance: 1) Saturday was forecast to be sunny after the morning; never happened. 2) Saturday was colder than anyone predicted and the snow that accumulated seemed slower to leave than most forecast.

Slush Time According to Most Local Forecasters

There’s decent consensus among local forecasters that winter is about to make another appearance in the Twin Cities (halfway into “meteorological spring,” no less!). Here’s the latest summary of what the local weather gurus were thinking.
WCCO: (Midday update) A good 1-2” mainly on the grass
KSTP: (Afternoon blog) Overnight tonight expect a mix of rain and snow mixing to all snow with 1 - 2 inches of slushy accumulation by Saturday morning.
FOX: (morning blog entry) A dash of white can be found on Metro yards for Saturday morning
KARE: (3:55 p.m. update) Expect up to 1 to 2 inches of slushy accumulation on grassy areas by Saturday morning with overnight lows falling into the low to mid 30s
NWS: Rain and snow in the evening...then snow after midnight. Snow accumulation of 1 to 2 inches. Lows around 30.
Star Tribune: 1-3” of slush

Here's a previous blog post from Wednesday night that seems to have been eat up by the Blogger server. Note that if it does snow, KSTP will be wrong on this forecast.


WCCO: Precip will start as rain Friday evening. We will see a transition to snow. Computer model depiction shows .8 … thinks much will melt on contact. Could see light, slushy accumulation, mainly in yards.

KSTP: Thinks will stay all in the form of rain.
FOX: We’re not talking accumulations; put the shovels away.
KARE Bulk of moisture will be rain, possibility of slush here and there but nothing to be alarmed about.
NWS: Rain/snow Friday evening, then snow after midnight. Accumulation up to one inch. Chance of rain and snow Saturday morning.
Strib: Coating to an inch or two (as of Wednesday morning)
MPR: At this time it doesn't appear that there will be much accumulation about the Twin Cities region, but we reserve the opportunity to revise that by Thursday afternoon.
If you're new to the Minnesota Forecaster, you can also follow us on Facebook and Twitter.
Posted by Bill at 4:06 PM 25 comments:

Spring Fling Over ... Four-Letter S Word Back in the Forecast

Did you enjoy those precious few hours in the "warm sector" today? Now that the threat of severe weather has scampered well east of the Twin Cities, the juicy weather talk has moved back to something rather familiar: the possibility of snow for late this week. Here are a few choice comments from the ever fearless forecasters of the Twin Cities: (We'll monitor what other weather outlets may have to say about ss ss sssnnno snow in the coming days).
KSTP/Dave Dahl: I hesitate to even bring this up, because most of us have pushed beyond winter, but there is a chance for snow over parts of the state Friday and Friday night.  An unusually cold storm system is expected to drop temperatures enough, that when combined with moisture, could actually produce some snow over southern Minnesota.  Let's hope this is just a figment of the computer's imagination and doesn't become reality, because I don't think many of us can handle more snow.  It's something we'll keep an eye on this week, but watch for updates because this is likely to change before it arrives.

Strib/Paul Douglas: No, I'm not predicting 15" of snow. I'm showing you what the raw model data is suggesting. The GFS has been notoriously bad, especially since February. But the odds of another (major) storm are increasing for the latter half of the week, and enough cold air may wrap into the storm's circulation for a mix of rain and wet snow. But a foot of snow - in mid April? Probably NOT going to happen. And yet that little (insane) voice in the dark recesses of my brain are shouting "be careful Paul!"

First Stormy (Severe?) Weather of the Season This Weekend?

Updated the forecast highs for the weekend (in red). In two days, Fox has raised its forecast high for Saturday by a whopping 16 degrees. Most outlets have raised forecast high temps as well, but not to the degree that Fox has. However, interestingly enough, the late Strib update reflects skepticism that temps will get out of the 50s on Saturday, making it the only forecast to reverse the trend.

Forecasters are suggesting a thunderous weekend may be in store this weekend with the season's warmest temperatures to date. We're not sure exactly how to grade and assess such a forecast, but it's worth a discussion. So, discuss away.

Note the largest temperature variance is between Fox and KSTP.
Posted by Bill at 4:22 PM 68 comments: