As Minnesotans suffer through the first real cold jolt of the season, our friends on the Mid-Atlantic and Northeast coasts are under the gun from an already much-publicized tropical-ish storm. It's taken the weather world by storm -- no pun intended. Use this space to discuss your thoughts on this potentially historical weather event.

If you're looking for a great weather site that provides detailed, non-hyped commentary on Sandy, we recommend following the Capital Weather Gang.
Posted by Bill at 2:42 PM 54 comments:

The need to name significant, and sometimes insignificant, weather events has reached a new peak. Partially brought on by The Weather Channel's decision to unilaterally name weather events it considers important, the idea of naming storms has stirred great interest -- and now controversy. Many have nicknamed Hurricane Sandy "Frankenstorm." CNN has gone on record as denouncing the use of a name that it feels trivializes a potentially destructive storm.

The Capital Weather Gang reports that the "Frankenstorm" nickname stemmed from use in a National Weather Service-issued statement. And so the plot thickens.

Here are some twitter responses on the subject. Do you agree? Disagree?

The Curse of the Weather Radar: The Night That Weather Paranoia Ran Baseball 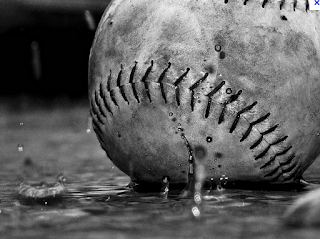 Baseball’s Murderer’s Row used to be the first six hitters of the powerful 1927 New York Yankees. Today, the game’s most feared opponent may well be the nasty little green and yellow pixels your neighborhood weatherman points to on the evening news.

What transpired tonight in Detroit was absurd. With a line of showers closer to Indiana than Detroit at the 8:00 p.m. ET starting game time, Major League Baseball inexplicably delayed the start of the fourth game of the ALCS. Finally, at 9:25, with light rain still 30 minutes away, MLB postponed the game.

This is an outrage on so many levels and rivals the idiocy of the 2002 all-star game that ended in a tie. Had the rain been minutes away from Comerica Park – truly close to meteorological inevitability – the delay would have been a bit more understandable. But it was far enough away that: 1) a good chunk of the game could have been completed, and 2) the precipitation could have dried up or circled around Detroit.

Unlike the situation in St. Louis, the precipitation heading to Detroit was merely steady rain, hardly the stormy weather that produced a Severe Thunderstorm Watch for the St. Louis area. It’s quite possible the game’s final innings could have been played before conditions worsened to the point where a legitimate delay may have been warranted. There was also a remote possibility that the entire game could have completed before the first drops of rain came down.

Just as it’s been since Abner Doubleday invented the game, October baseball is fraught with weather issues. It’s likely to be chilly, windy and rainy. It happens. And it’s been happening for a hundred years.

To its credit, MLB recently changed the rules regarding rain delays in the playoffs to ensure that no game would ever end without going its full length. The fact that this rule exists makes the decision to delay and then cancel a game nearly two hours before the onset of rain even more unconscionable.

To be sure, there are two interests that baseball is protecting. One it will admit and one it won’t. It’s possible, maybe even likely, that starting pitchers may not have been able to resume the game after a long delay. (We’ll let the babying of baseball pitchers be another topic for another day.) But, so what. That’s part of the game. Perhaps a weather-savvy manager might even be bold enough to hold out a starting pitcher in expectation of inevitable rain.

The second reason is – this just in – MLB wants to keep New York on the baseball radar for as long as possible. Had the team’s ace, CC Sabathia, been forced to come out of the game after a delay, it would have hurt the Yankees already slim chances of winning the series. The postponement effectively keeps general interest in the Yankees team for one more day.

We can only conclude that Bud Selig was doing his best Jim Cantore impression, sitting in front of a large monitor trying to make sense of those annoying little pixels. Clearly, he confused the green radar echoes with greenbacks.

Please keep your eyes and ears open for the 2012 winter forecasts. We'll be collecting them and presenting them in a future blog entry.

To date, here's what we've heard of for winter forecasts:
Dave Dahl's forecast (61 inches of snow)
Live Weather Blogs (44.3 inches of snow, near average temperatures)
Paul Douglas forecast on Oct. 23:
I've mentioned it a few times on the weather blog. I suspect our dry bias will hang on into at least the first half of winter, thru December. A weak El Nino may steer the most significant storms well south and east of Minnesota, but my gut (a "wish-cast"?) is that we'll see more plentiful snows after the first of the year. I refuse to believe that we could see two 20" winters, back to back. The odds of this happening are slim. If I had to throw out an inch figure (dangerous) it would be in the 40-45" range, so more than last winter, but still almost half the snow that fell during 2010-2011, when a strongly negative NAO (North American Oscillation) blocking pattern kept a fresh supply of sloppy, southern storms pushing north across the Plains. My gut is telling me this winter will be closer to last winter than the 86" winter of 2011-2011, but I still suspect we'll see more snow (and more cold) than last winter. Stay tuned...