How Cold Will She Go?

The coldest, most prolonged arctic surge was expected to push through the Twin Cities late Saturday. Here's a graphic we saw issued by WCCO: 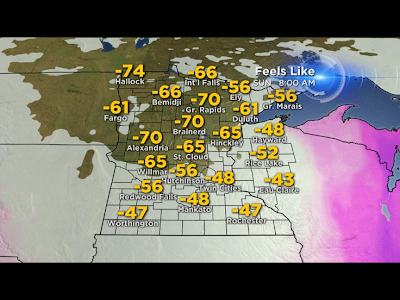 Prospects for Snow Both Sunday and Xmas Eve/Xmas

While it appears that most of the heavy snow from the weekend will fall south and east of Minnesota, there is still potential for accumulating snow on Sunday. And for those who want fresh snow to decorate Christmas Eve and Christmas Day... well, ma nature may just be feeling cooperative. The details are discussed in our latest video with Tom Novak and special guest Daniel Dix.

Thursday Night Snow and a Weekend Snowstorm for the Midwest:The Weather Classroom

Some snow appears in the offing for Thursday night and our resident chief meteorologist, Tom Novak from @MinnesotaWeather, says to keep a close eye to the near southeast over the weekend. Here's our latest video.

Also, Tom and I are interested in your feedback on our video. What works for you? What doesn't? We really want you to be honest so we can make it better. Please leave your thoughts in the comment section. Thanks!

At the Minnesota Forecaster, we love it when forecasters have differences of opinion. When all weather outlets predict the same thing it's boring.

As of this Wednesday evening, we've got a wide range of forecasts for next Wednesday (Dec. 18). The difference in high temperature forecasts between KARE and KSTP is a whopping 21 degrees!

**Update as of Thursday morning** KARE -- and to a lesser extent  WCCO -- have made significant revisions in their extended forecast. Overnight, KARE adjusted its Wednesday forecast from 9 to 29, while WCCO upped the forecast high from 12 to 20. It's obviously still way early, but it appears that KSTP grasped the trend before most other stations.

**Update as of Thursday evening** KARE is BACK to a forecast high of 9 on Wednesday. KSTP now forecasts a high of 20 for Wednesday.


Here are the forecast highs for next Wednesday that we gathered late this evening:

Two to Four Inches is Most Popular Forecast for Sunday Snow

Most forecasters were on board with a 2-4" snowfall forecast for Sunday. The exception was KSTP with 1-3". Here's a look at forecasts we picked up on Saturday morning.

With winter precipitation expected to begin by midnight, here’s the latest summary from the various forecasters. KSTP has the most aggressive forecast with 6-10” forecast. Accuweather and Minnesota Forecaster in-house forecaster Tom Novak were on the lower side. As we’ve seen fairly often over the last several years, KSTP is at the high end for TV forecast outlets and KARE is at the low end. (It’s been suggested that you can take half the KSTP forecast and arrive at the KARE forecast; that seems to be the case in this instance.)

We were struck by the NWS comment regarding their confidence in the forecast. A tweet at 3:04 p.m. this afternoon stated, “Confidence where that rain/snow line will setup is below average this close to the event.)”

Finally, if you’d like to learn more about the atmospheric dynamics causing the upcoming storm scenario, view our video with forecaster Tom Novak.

A Forecast in Flux

As of late Monday night, predictions for a possible snow event Tuesday night into Wednesday was, as MPR’s Paul Huttner put it, “a forecast in flux.” Although the National Weather Service issued a Winter Storm Watch mid-afternoon Monday, there was a sense that many forecasters were not quite buying into such lofty possibilities. However, there was also a sense that the storm was taking a more southerly route, which would bring heavier accumulations closer to the Twin Cities from the north.

Side note: We did want to bring attention to what we consider one of the better weather blogs for a Twin Cities television forecaster (i.e., excepting MPR and Strib weather columns). KMSP's Cody Matz provided some nice graphics and an accompanying explanation of how and why the expected heavier snow accumulations have moved south in this blog.