Monday Monday, What Will You Bring?

The possibility of significant snow was in Monday's cards as of Sunday night. Here's a video we did with Novak Weather that discusses the storm in detail. Here's some forecasts that we gathered at about 9:30 p.m. central time: The Search for Snow

A most unusual winter of rain and warm temperatures has persisted in the Twin Cities. As of this writing, however, there seemed to be the possibility for snow in the Dec. 25-26 period. We shall see.

The Curious Case of Dave Dahl

Avid weather enthusiasts know that Dave Dahl is not afraid to stand out from the crowd, even the crowd at his own station. And there's nothing necessarily wrong with that. But what should be concerning is how often his snow forecasts are notably too high. I've actually heard some in the business say that you can take half of Dave Dahl's snow forecast and that will give you KARE11's snow forecast.

At any rate, Dave is once again standing apart from the crowd. His blog from today (Dec. 7) expresses confident in a pattern change, one that almost assuredly will be good news for those who love snow and who want a white Christmas. As always, we shall see. 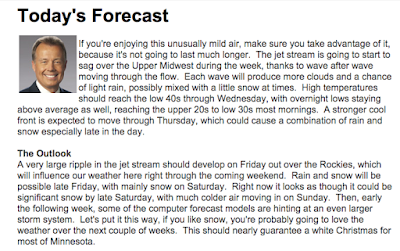 Monday Storm Promises Precip -- How Much Will Be Snow?

We re-engaged with Tom Novak from NovakWeather to discuss exactly what we can expect for Monday-Tuesday in the way of snow. He's confident that there will be moisture, but less certain how much will fall as snow vs. rain, particularly from MSP to Rochester. 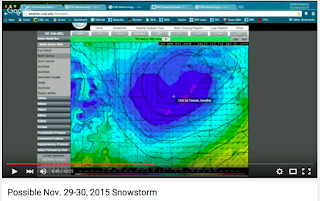 Now that more seasonable weather has come to Minnesota, weather aficionados are wondering if a legitimate snowstorm is around the corner. As of today (Saturday), the National Weather Service was anticipating a larger liquid storm for the Twin Cities to arrive in the Thanksgiving time frame. As always, time will tell.
Posted by Bill at 5:44 PM 29 comments:

Can El Nino Be a Reliable Predictor of Our Weather?

Now that I reside in California (but still monitor Minnesota weather closely from afar), the mystery of what El Nino holds is a BIG deal given the major drought here. Minnesotans may wonder if it means a "boring" winter with minimal snowfall and cold, but Californians are praying it means a replenishment of modest water supplies. 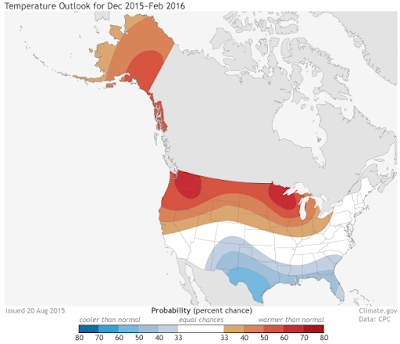 As most of you know, I'm interested in weather and have a wee, wee bit of knowledge, but the main thing I bring to the table is the perspective of the armchair weather enthusiast. From where I sit, I watch all the professionals (and others) make assumptions about what El Nino (and a strong one, at that) likely means for the nation's winter weather. Most of it seems to me to be based on correlation rather than true cause and effect.

For that reason, I personally am skeptical that things will go according to form. I just think weather is way too complicated to predict based on one, albeit significant, warm-water feature. I don't recall anyone predicting that the winter of 2013-2014 would be a record setter. Likewise, most predicted last year to be considerably warmer than it came in. (I speak of Minnesota's weather.)

So, what do you think will happen this winter? Do you think it's too early to know? Do you think there's any reliability whatsoever in seasonal predictions? Let's hear your thoughts!
Posted by Bill at 6:00 PM 70 comments:

With a fall-like storm winding up, one has to wonder: is summer essentially over? Heavy rain and summer chill is descending on the North Star state. Is this the beginning of the end?
Posted by Bill at 12:20 PM 27 comments:

One of our favorite forecasters is leaving for greener... err uh, whiter pastures. We've known Patrick Hammer as a true stand-up guy who isn't afraid to take a strong position in forecasts. He's also been a frequent video contributor to The Minnesota Forecaster, helping to provide colorful commentary on Twin Cities weather events.

Patrick is leaving for Buffalo. You can find the details in the Buffalo press as well as in the Star Tribune. We wish him well!
Posted by Bill at 12:41 AM 77 comments:

With a forecast of 70 on April 1, there was hope that maybe, just maybe, spring was ready to take up some quality residence. Thunderstorm chances were also in the forecast, so there might be a little rockin' and rollin' on the horizon. 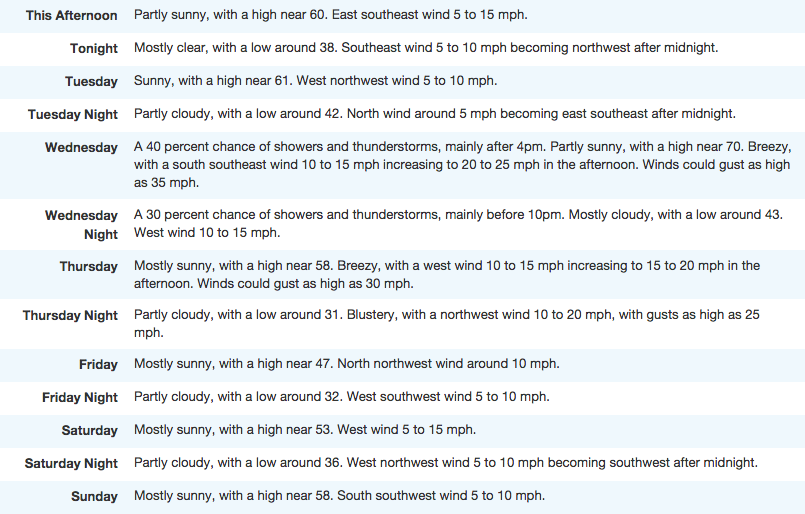 Some meteorologists were talking as if Tuesday could be the end of winter as we know it. We shall see. In the meantime, as of late this Monday evening, here's what we found for Tuesday forecast snow totals on Tuesday from a range of outlets.

Maybe they’re all like this, but the winter of 2014-2015 seems especially odd. In Minnesota, a frigid November gave way to a most mild December. And January’s been a mixed helping as well, though a warm bias has been the prevailing characteristic. However, one constant has been the lack of significant snow and the lack of consistently stellar, recreational-friendly snow cover.

As meteorological winter entered it’s final third, snow lovers were looking far and wide for signs of the precipitation type they live for. Others were thrilled at the prospect of a winter that, while still challenging by most state’s standards, was proceeding in a tolerable fashion.

(And then there was your fearless host, who wonders if California will ever again see rain.)