Hot, But Not Advisory Hot

Yes, it was hot today. And the oppressiveness came late and continues late into this summer evening. Make no mistake, if you don't have air conditioning, you're not a happy puppy.

The NWS issued a heat advisory today. A portion of the official wording from a statement issued at 10:09 a.m. read as follows:


... Heat advisory remains in effect from 1 PM this afternoon to 8 PM CDT this evening... temperature... in the mid to upper 90s this afternoon. The combination of hot temperatures and humidity will make it feel like 100 to 110 degrees.

Let's put the advisory to the test. The official high temperature at MSP was 93, not the middle to upper 90s. The highest heat index reported through 9 p.m. was 98. Not once did the heat index register in the predicted 100-to-110 degree range. One could even argue that the worst of the heat actually occurred from 4 p.m. to 9 p.m., but that would be splitting hairs.

A busted advisory? We think so. It's tempting to say, "Well, it was hot enough, so what's the difference?" But if that's the case, what's the point of issuing an advisory in the first place?

Do you think the concept of issuing a heat advisory has merit? Let us know your thoughts.
Posted by Bill at 9:59 PM 21 comments:

A Busted Summer Weekend Forecast (Like You Didn't Know)

Not that you needed us to tell you, but yes, it was a busted forecast this weekend. In fact, it could be argued that the inverse of what was forecast occurred for much of the weekend.

As of Friday night, the consensus of forecasters was that Saturday would likely bring rain by evening, possibly heavy, and that Sunday would be a delightful day for dads desiring good weather. This is a tweet that's representative of many others with a similar message.

In general, the complete opposite happened. Saturday morning provided an unexpected washout (approximately .5 inch of rain fell in St. Paul) and the afternoon (for the central Twin Cities) provided only fleeting light showers that were hardly worth noting. By 1 p.m. Sunday, rain had begun to fall in St. Paul, and the radar suggested that rain would threaten for the rest of the day.

Think the anger over a missed summer forecast isn’t real? Think again. Here’s what one tweeter had to say: 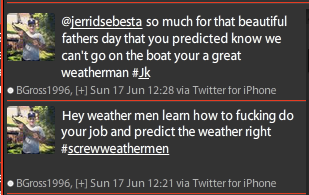 We applaud Jerrid Sebesta for invoking a little humor into the situation:

Tornado or Straight-Line Winds: When Does the NWS Investigate?

After seeing firsthand the significant storm damage from powerful winds that occurred in and around TMF headquarters in St. Paul last Sunday night, we had cause to wonder: When does the National Weather Service decide to further investigate whether storm damage was caused by a tornado or straight-line winds? Obviously, to a property owner who’s looking at a tree over their car, the exact cause is not likely to be a pressing concern.

We took our question to Todd Krause, the warning coordination meteorologist at the Twin Cities National Weather Service in Chanhassen. Here is what he told us:

There are a couple reasons why we do surveys. One is if there is a great deal of interest (usually by the media and public) in what caused the damage (that is a subjective call on our part). We also will do a survey if we are trying to figure out scientifically what happened, so that we can review the radar data and other environmental clues and learn something for the next time. Even if we have had warnings in place, it is still important to learn something about what we’ve seen on radar etc.

Having said that, there will be times when we do not perform a survey every time there is damage somewhere. Sometimes staffing is such that we cannot spare anyone to go take a look. Or maybe more severe weather is anticipated and we need to remain at the office.  Or maybe somebody has provided pictures/video of a tornado or downburst and it is patently obviously what caused the damage. Or the scenario is obviously a certain type of damage (e.g. the Goodhue County storm damage on June 14 – see http://www.crh.noaa.gov/images/mpx/NewsStory_June14.pdf).

Thanks to WCCO for including our input on the 6 p.m. newscast. Our work was also featured in the Star Tribune as well as the MPR News Updraft weather blog.

Considerable damage was sustained from a severe storm in Highland Park, St. Paul. There were no sirens prior to the storm. Here are a few glimpses of damage that occurred within a few short blocks of each other. We counted at least five trees that landed on cars and several streets and alleys were impassable. Trees generally seemed to fall in a southwest-to-northeast direction.

With wind gusts reaching 59 mph at MSP, approximately three miles away, it seems like that winds approached or exceed 70 mph in this area. 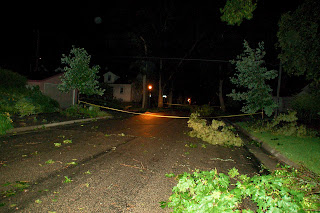 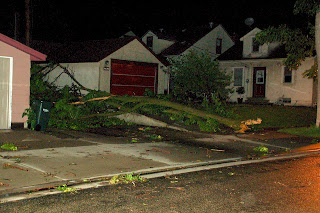 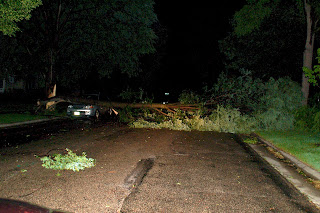 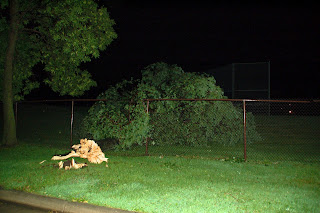 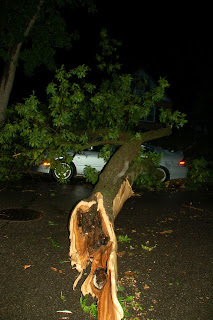 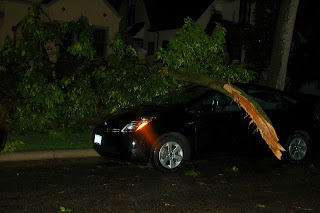 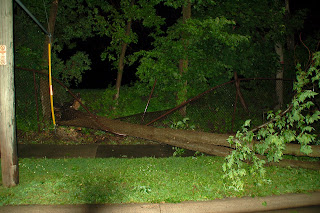 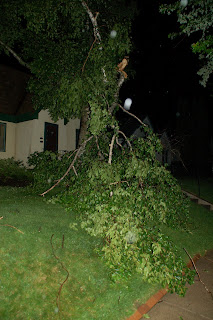 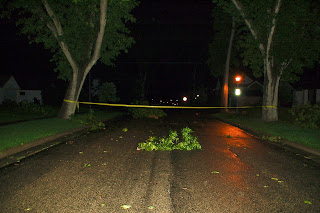 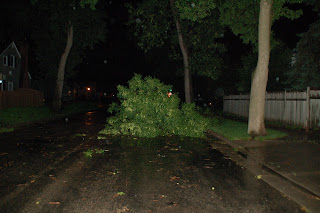 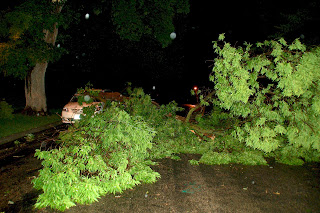 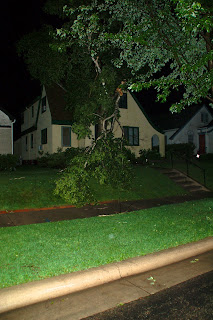 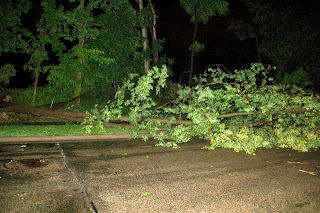