A Test of Mid-Range Forecasts: Forecasters Calling for Arctic Air Next Weekend

With unusual unanimity for a forecast so far out, local meteorologists warned upper midwesterners to gird for some arctic temps NEXT weekend. As of Friday night, some forecasters were warning of sub-zero low temps and single digit high temps. We were surprised to see that old-school forecaster Craig Edwards, who typically doesn't discuss weather beyond 5-7 days out, noted the model forecasts for next weekend. Here's a sampling of what we could find. 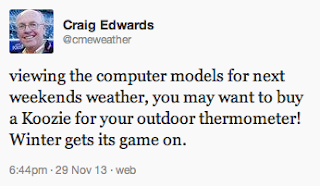 Most Forecasts Expecting Little More Than Coating for Thursday Night

Here’s a recap of forecasts for Thursday night’s possible snow. As much as possible, we’re using forecasts closest to 24 hours before onset as the forecast of record. Several forecasters have told us that 24 hours before snow onset is the time when you can best separate the men from the boys.

That said, for Thursday night’s forecast, there’s really not a lot of separation. As best we could determine, the NWS was the most liberal with snow forecasts (mentioning 3” on the top end of the range) while WCCO and KSTP seemed to poo poo the possible snow the most.

Herewith, the less than staggering snow forecast for the evening of Thursday, November 21, 2013:

KSTP: Coating to an inch

KMSP: Total accumulations look very light with around an inch in the metro and generally 2 inches or so for southern Minnesota. (Source: website post at 5:04 p.m.)
KARE: Said 1-2”. Showed 2” for MSP on graphic (6 p.m. news)

Harnessing the Power of Wind – In Minnesota and Beyond

Several weeks ago on the way to Joshua Tree National Park from Los Angeles, I passed through the largest field of wind turbines I’d ever seen. And, as if on cue, strong gusty winds suddenly whipped through the San Gorgonio Pass, buffeting my lightweight rental car. I was inspired by the sight of wind turbines extending out to the horizon, and wondered what goes into decisions on where to build these icons of green energy.

Fortunately, I didn’t have to wait long. Just weeks later, Kate Mullin, resource modeling analyst from WindLogics, a St. Paul-based company that provides forecasting and optimization solutions for sustainable power, gave a most informative talk to the Twin Cities Meteorological Society. She talked about the process by which wind power developers estimate the future energy production of a wind farm. While the following is by no means a complete summary of Kate’s presentation, I thought I’d share some of the facts we learned that I found interesting.

There are highly detailed maps that depict wind across the United States, providing a basis for determining locations that may be best suited for the construction of wind turbines. These maps display average annual wind in meters per second. You can multiply meters per second by 2.2 to get an approximate miles-per-hour measurement.

Although there are several small and isolated pockets of high winds in western parts of the country, the majority of larger-scale strong winds occur in the central part of the United States. Minnesota is among the windiest parts of the country with southwestern Minnesota – owing in part to the Buffalo Ridge formation – experiencing the strongest average winds.

An analysis of potential sites for wind farms includes mesoscale weather forecast model data, such as the Weather Research & Forecasting Model (WRF), as well as terrain-based models that take a closer look at smaller geographic grids (1km and 50m resolution).

Meteorological towers (“met” towers) are used to capture hourly data such as wind speed, wind direction and temperature at heights of up to 100 meters. Wind flow models incorporate the data and produce forecasts of wind conditions for an extended period of time, such as 30 years. Ultimately, the data generated will determine if a project is financially viable during the pre-construction phase.

The actual design of a wind farm incorporates a variety of factors. First, it’s a function of where land can be obtained and if it’s subject to any land use restrictions. Additional considerations include the form of power transmission, whether the site is close to housing and development, and environmental restrictions.

(Kate noted that regulations for wind farms in Canada are particularly stringent given environmental and other concerns. In the United States, Iowa and Texas are among states considered the most “wind-friendly.”)

After the potential energy production from a wind farm is calculated, other factors that can cause production losses must be considered. One of these factors is wake, a concept we might think of when it comes to a cyclist drafting behind another cyclist in a velodrome or a car following closely behind a large truck on the highway. In wind circles, it refers to the effect that one turbine has on additional turbines that follow down the line. Kate shared a particularly interesting graphic depicting wake that most everyone in the wind industry has seen. It’s an image of the Horns Rev offshore wind farm in Europe’s North Sea.

Some of the other factors that can reduce the productivity of wind turbines include the availability of the proper turbine model (different models are built to maximize different wind environments) and curtailment, which occurs when wind conditions are favorable, but for one reason or another the wind energy is not sent to the power grid.

So the next time you see a wind turbine, whether in the California desert or on the snow-covered prairie in southwestern Minnesota, take pleasure in knowing that energy is being captured from resources that are continually replenished, but also know that a ton of work – including complex wind forecasts – go into the building of them.

It’s snow time, and a winter-obsessed populace turns its blue eyes to you. If you’ll follow a few of our pointers, we’ll get through this season with a healthy appreciation for meteorology and a minimal amount of misunderstandings.

Ditch the Snow Meter
It’s certainly tempting to use all the tools that WSI and other weather providers give you to wow us. But remember, we’re generally lazy, literal simpletons who glob on to whatever we see on the screen (especially if we’re not listening closely). If we see you point to a graphic showing 7.5 inches of snow in Mankato, 11.6 in Maple Grove, and 5.1 in Rochester, we’ll take it to the bank.

Here’s the problem. The snow meter suggests a level of preciseness that the science can’t yet support. It’s hard enough to get snowfall forecasts right to within an inch or two; why make it more complicated by displaying forecast amounts to the tenth of an inch?

Go Barry ZeVan on Us
Sometimes, old school is the best way to go. There’s nothing wrong with hand-drawn general estimates of snowfall amounts presented in colored gradation bands (just proof them to make sure no bands are missing, something that happens surprisingly often). Yes, this may be more time consuming than simply slapping up a pre-programmed depiction, but it’s worth it. Knock yourself out by using fancy colors but keep the presentation simple.

Keep Model Data Behind the Green Screen
These days there’s no shortage of weather models, whether proprietary or public. And access to the information is equally unprecedented. But please keep the model data to yourself. And never, NEVER, display the one outlier model that shows gargantuan amounts designed to make us drool. We’ll take it the bank and that’s no good for anyone. Ultimately, model data is your domain and should be kept under control of those who know how to interpret it.

(Major Exception: Weather Bloggers)
It makes more sense for weather bloggers to show model data, though even they might want to be careful as well. Just as true foodies might like to hide out in the chef’s kitchen, weather enthusiasts might enjoy a little inside baseball when it comes to weather. Weather bloggers also have the luxury you don’t: unlimited time. They can educate us to their heart’s delight and update essentially continuously.

Use Snowfall Probabilities to Communicate Uncertainty
There’s no such thing as a sure bet in snowfall forecasts, so why not communicate uncertainty? Tell us there’s a 20% chance of 4+ inches of snow, a 60” chance of 2-4 inches, and a 20% chance of less than 2 inches. This may threaten your inner macho, but it’s all about communication. When it comes down to it, it’s your communication abilities that we judge, almost as much or more than your actual knowledge of meteorology. The Capital Weather Gang, a weather blog produced by the Washington Post, sets the standard for communicating uncertainty.

Stand Up to the News Director Who Wants to Play Up A Storm
OK, this may tread on job security, but if you’re honest with yourself you know you’ll be doing the right thing. We know that snow sells almost as much as sex. You’ve probably been asked at some point to “play up the snow possibility” either explicitly or subtly. When the anchor leads with, “Hey Eddie, big snow coming our way, eh?” nip the hype in the bud with, “Ginger, this one will barely cover the grass!” Viewers will appreciate the straightforward approach.

Post-Storm Evaluation
Here’s where you can earn gobs of credibility. If the storm didn’t pan out as forecast, as often happens, come out and say so directly. A simple phrase like, “It was less than we expected and here’s why,” is all that’s needed. Better yet, if you communicated storm uncertainty with pre-storm probabilities, you can say, “the concern we had that thunderstorms in Iowa would steal the system’s energy materialized.”

By following these tips, you can become a truly trusted resource in this mother of all Minnesota seasons.

P.S. – Go easy on the non-weather tweets or consider setting up a separate Twitter account for non-weather tweets. The more extraneous stuff you throw in, the harder it is for us to sift through the important stuff.


If you're a meteorologist or consumer, what are your thoughts? Agree? Disagree?

Twenty-four hours before the approximate onset of MSP's first measurable snow, most forecaster were expecting roughly 3 inches of snow to fall in the urban core. The following information was what we were able to gather online at 7:30 p.m. on Monday night. 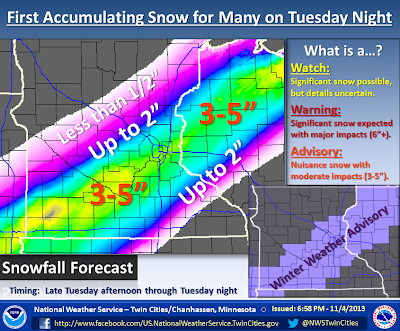 KSTP (kstp.com) Here in the Twin Cities we'll probably end up with 2 to 4 inches of snow before it winds down early Wednesday.  This should make the roads slick, especially the side streets, for the Wednesday morning commute.

KSTP. No recent information or video posted on website.

MPR (http://blogs.mprnews.org/updraft/) 5:25 p.m. posting. Most of the metro will probably end up in the 1 inch to 4 inch range for snowfall by Wednesday a.m.

Paul Douglas/Star Tribune. (Update at 2:01 p.m.) Note the sharp gradient from north to south, maybe 1-2" for the northern suburbs, as much as 3-6" in the central core of the metro, with some 5-8" amounts not out of the question far southern suburbs,