The "South Napa" Earthquake, as it's now being called, provided quite the educational opportunity for Bay Area natives. Just as Minnesotans are conversive in dewpoints and can recall the years and locations of tornado outbreaks, Californians can name notable earthquakes and speak with considerable facility about the types of plate shifting causing the various types of earthquakes. It may not be the kind of weather that fascinates four-season-loving Minnesotans, but it's still pretty interesting stuff.

Here are some random pictures from local weather segments and other media communications in the days immediately following the South Napa Earthquake.

Many readers know that I've moved to the Bay Area. Here's my account of last night's earthquake, the Bay Area's largest since the 1989 Loma Prieta earthquake.

The moment I’d long been looking forward to occurred last night at 3:20 a.m. Here’s what I did (and didn’t) experience:

I’d been having a lousy, restless night of sleep. I’d taken a Benadryl so I was in a fog, but it obviously hadn’t knocked me out enough so that I was sleeping soundly.

At the fateful moment, I’d been concluding a short visit to the bathroom. As I finished up I heard a series of popping noises. The suddenness and general sound vaguely reminded me of a summer storm where hail commences abruptly, creating popping noises on all that it contacts. But knowing that such monster hail wouldn’t be possible here, my mind raced for other explanations. Could it be kids in the neighborhood up to pranks in the middle of the night?

Soon, I was pretty certain the sound was from the cords from blinds striking either the blinds or windows. This seemed a reasonable explanation because it’s often windy here and we frequently have the windows open to let the ocean-cooled air rush in.

But then I realized there was absolutely no wind and the night was otherwise calm. The fast-developing mystery was moving into high gear. “What the hell is that?” I blurted to Rachel, whom I expected would still be sound asleep.

“I think we’re having an earthquake,” said the seismic-experienced, California native. “Really?” I said. “Yes, I can feel the rolling. It feels like we're on a boat in the ocean.”

By then, of course, it was essentially over. And my immediate response – yea I’m a sicko – was anger that I didn’t fully experience this other worldly event. Rachel theorized that the lightheadedness I felt, which I blamed on sleep deprivation and the woozy effects produced by Benadryl, was because I was standing while the house was shaking.

I opened up my iPad in search of reports that would confirm that yes, I really just experienced an earthquake. At first, there were no reports. Then, finally, this tweet: 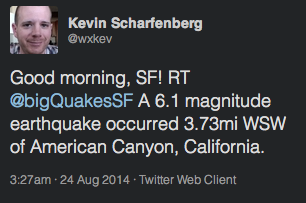 So there it was. After nearly five months in California, I experienced my first earthquake (just one week after seeing my first grass fire). I regret that I didn’t feel the rolling motion in bed, see the blinds moving (since it was dark), or have the presence (and clarity) of mind to know and embrace what was happening, but at least I was here when it happened. Still, learning that it was the biggest Bay Area quake in 25 years and figuring that another shaking of this size is unlikely to occur any time soon, I was disappointed. I felt like a storm chaser who, while observing the tornado, took the wrong road and didn’t get the best possible view.

Amazingly enough, there was not a picture out of place nor any other physical evidence of what, evidently, was a most significant shaking. In fact, Rachel’s sister, who was staying with us, said it was the worst quake she’d ever felt.

Summer (and Rain) on the Wane

The rain spigot appears to be turning off as the Twin Cities moves well into August. When will it rain again? Will severe storms threaten again this year? Is...ahem... snow far off?