I Only Have Ice For You

As of late Tuesday night, the Twin Cities enjoyed a veritable ice storm, with seemingly considerable more ice accumulation than virtually all forecasters anticipated. Here are a few pictures taken from TMF headquarters in St. Paul. 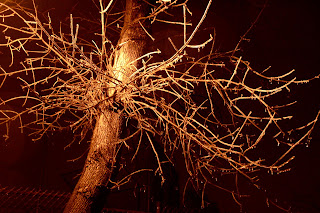 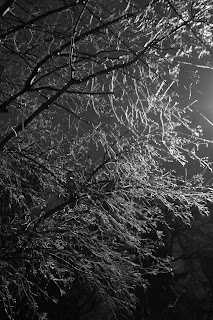 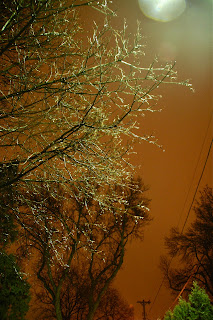 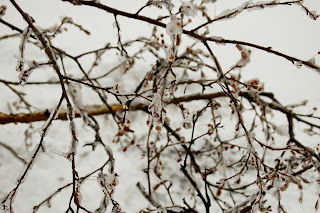 What will Wednesday bring? And, in the end, which forecaster will have come the closest to predicting the storm?
Posted by Bill at 12:45 AM 64 comments:

As of late Monday night, nearly all weather outlets were minimizing snow forecasts. The primary exception was KSTP, which was still calling for 4-8 inches and the NWS, which was calling for 3-6 inches. Most other outlets had followed MPR's lead from earlier in the evening and were in the general 1-2 or 1-3 inch range, with most snow expected to fall on Wednesday. The latest comparative forecasts appear here.
The much-talked about major Tuesday/Wednesday snowstorm now seems to be in doubt for the Twin Cities as many forecasters began changing their forecasts late this morning. Most weather outlets predicted an increasing likelihood that mixed precipitation would bring snow accumulation down considerably. We're trying to keep track of the various and fast-changing forecasts here.

Given that so many snow forecasts have gone south (or north) this winter, TMF conducted its own investigation into why weather models are behaving so erratically. With a little digging, we found the cause. Using a well-placed spy camera we determined how the models were being guided and captured the picture below. 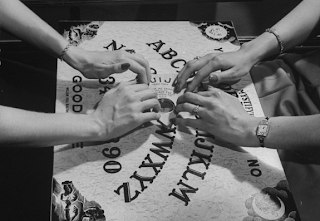 We'll continue to track the models, ehrrr forecasters, as the storm -- in whatever form it takes -- arrives in the Twin Cities.
Posted by Bill at 12:42 PM 135 comments:

A Friendly Challenge to Local Forecasters

We challenge local Twin Cities forecasters to get creative and more informative in their forecast presentation as we get closer to a potential big storm on Tuesday/Wednesday. We’d love to see them take a page from the Capital Weather Gang book and paint a storm scenario in simple probabilities, something along the lines of this:
This seems to be a very logical way of recognizing the possibilities of a given storm scenario while implicitly incorporating the uncertainty that comes with distance (in time) to the event. And just as the cone of a possible land-falling hurricane gets narrowed as time elapses, so too, could the probabilities of various outcomes.
Forecasters, what are your thoughts with this kind of presentation? Consumers/weather watchers, is this a presentation you'd like to see?
Posted by Bill at 9:44 PM 4 comments:

Sunday “Storm” On Deck, Larger Storm in the Hole

If a nation once turned its lonely eyes to Joe DiMaggio, then a snow-starved metro area turns its wishful eyes to Tuesday and Wednesday, when the latest possibility of significant snow seems to exist. While Sunday’s storm is about to take its expected weak at bat (think Drew Butera), the midweek storm that sits in the dugout has shown indications – at least to some forecasters – of having some Ruthian potential. 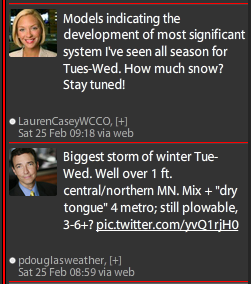 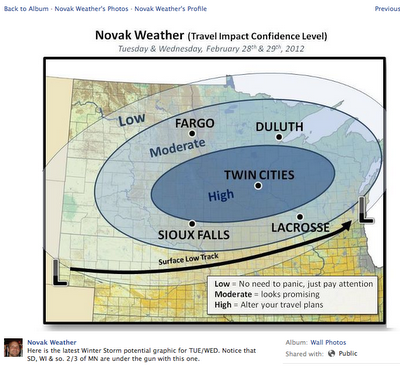 Wednesday night update: Most forecasters saw a northward move in the Sunday storm, resulting in a general lowering of storm expectations.
As they're all quick to say, the storm is still still in the Pacific, tracks could change, it's not set in stone, etc..... BUT it's clear that virtually all weather outlets (traditional and less traditional) are closely watching a big storm for Sunday. Here were a few of the headlines we came across on Tuesday night. 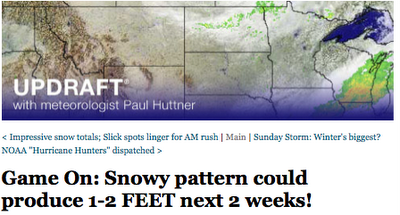 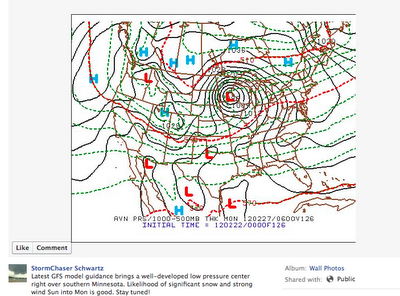 Update: Most forecasters now see Monday's storm as something less than a significant snowstorm.
For what seems like the first time in months, many weather outlets are looking at a legitimate possibility of snow on or around Monday, Feb. 20. While there's been hopeful talk about snowstorms in the past, this possible event is being noted by virtually all weather outlets, making it unique for this season. We'll be tracking what forecasters say about this possible storm as things evolve.

Even normally conservative KARE11's Belinda Jensen mentioned that "one model is predicting a big snowstorm here on Monday." While she went on to acknowledge that the model is frequently wrong (news flash!) and that they're looking hard to find possible snow, it's still noteworthy to us that she even mentioned the possibility.

For fans of weather accuracy assessment, today was a good day. In the process of launching its new "Best Forecast" feature, Weather Underground is also providing an unprecedented level of transparency by providing an accuracy comparison with the National Weather Service's National Digital Forecast Database.

Given Minnesota's reputation as a notoriously challenging location for weather forecasting, it will be interesting to see how the "Best Forecast" feature fares for our area. Either way, we applaud WU's new innovation in weather forecasting.

For more information about the new system, click here.
Posted by Bill at 7:13 PM 12 comments: