We haven't done many forecast assessments in a while because, for one, there hasn't been much snow in the forecast. Indeed, there's been a string of measure-by-the-millimeter snowfalls lately.

For much of the day on Thursday, forecasters were expecting the possibility of an inch or snow that could affect the Friday morning commute. However, by mid evening, most outlets had backed off that forecast, with many forecasting either nothing or just a dusting. And even a casual observer of the radar had not to notice that most of the snow had seemed to slide past to the southeast and northeast.

Notably, however, Belinda Jensen on KARE11 warned during the early weather tease on the 10 p.m. news  that up to an inch of snow was possible that would likely affect the morning commute. This was at the same time when all other outlets saw the storm's handwriting on the wall.

We can only wonder what KARE11, typically among the most conservative Twin Cities stations when it comes to forecasting snow, was thinking. Was it a steadfast belief that snow would materialize into something more than 10 flakes? Was it laziness in not accessing the weather data used by other outlets to produce a "call off the wolves" forecast? Who knows... but KARE11 viewers were decidedly not well served by the 10 p.m. weather forecast on January 24.

Switching gears.... As of Sunday mid afternoon, the NWS issued a Winter Weather Advisory for 9 a.m. Sunday to Sunday at midnight. The NWS had earlier issued a Winter Storm Watch that seemed rather puzzling to our uneducated eyes.

Beyond that, virtually all forecasters were predicting a return of the arctic cold by Wednesday night. 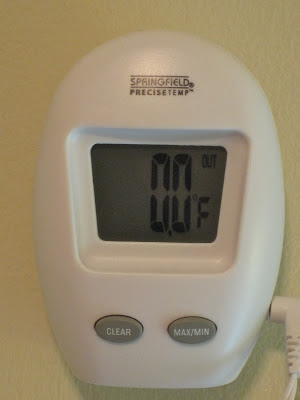 The much-advertised cold is here, and in our view it's been a very well-predicted cold wave. There's some talk among forecasters of a little light snow later this week, but clearly the word of the week is C-O-L-D.

A blog note: I understand there have been some problems accessing this blog and/or making comments. I'm note sure what's going on as I'm simply using Blogger as I always have. I've heard that there may be problems viewing it with Explorer so you may wish to try other browsers.

When it Comes to Snow Efficiency, Twin Cities a Dud