Now that our white Christmas drama is over, weather eyes scanned the horizon for true winter chill. According to most weather prognosticators, January seemed destined to live up to its bitter billing -- at least for the beginning.
Posted by Bill at 3:10 PM 163 comments:

What Color Will Christmas Be?

Concern over whether a white Christmas was in store for the Twin Cities was becoming a topic of greater and greater interest among the local folk. We won't say obsessed, but you get the idea. We sat down with Tom Novak (@NovakWeather) and Patrick Hammer to discuss possibilities in this video. 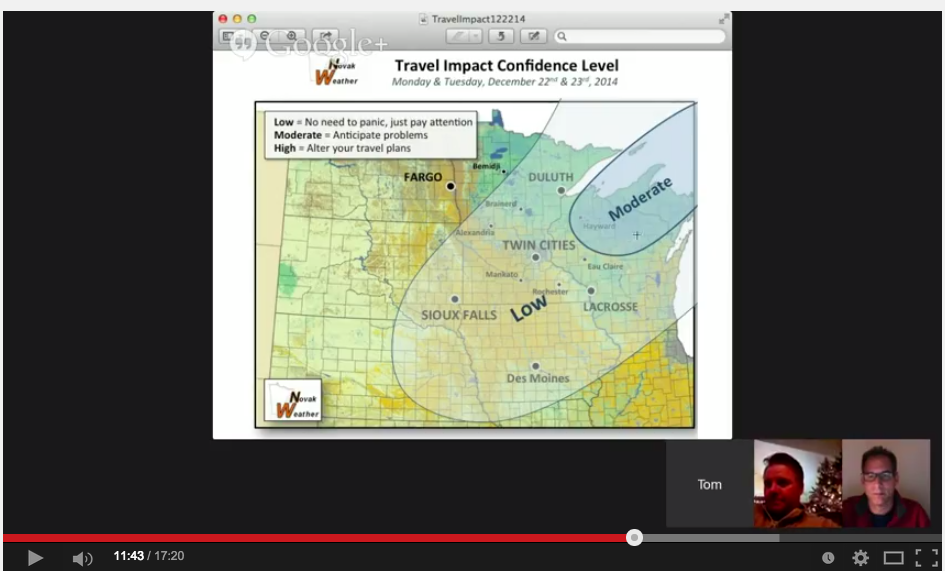 For those new to the Minnesota Forecaster (and if so, where've been?), you can follow us on Twitter and Facebook.
Posted by Bill at 9:45 PM 136 comments:

After an unusually cold November, weather eyes in Minnesota turned to maps suggesting a much warmer than average December was on the horizon. Indeed there was a collective sense that a major pattern shift was ongoing, with your intrepid blog author and former Minnesotan looking out at big puddles in Northern California.

Might there be any possibility that December will clock in warmer than November? Several years ago when a summery March took over the country, April was actually colder than March in Minnesota. So a seasonal reversal would not be unprecedented.

As always, time will tell. Use this space to comment on warm air that's coming (or not) and any snow (or rain!) that may be coming.
Posted by Bill at 6:51 PM 132 comments: