Late changes to what was initially expected to be a light snowfall Wednesday night/Thursday morning have created the prospects for a pretty solid snowfall packed into a few hours that just happen to coincide with the morning rush hour.

Here were the forecasts we accumulated late Wednesday evening from various weather outlets (amounts in parentheses represent the middle value in the range, which we assume would correspond to the central urban core and probably the airport):

Astute observers will note that this forecast is typical of so many: among the local television outlets, KARE is on the conservative low end and KSTP is on the aggressive high end.

Email ThisBlogThis!Share to TwitterShare to FacebookShare to Pinterest
Labels: WeatherBug

It's not a Panhandle Hooker but it's not a standard issue Alberta Clipper, either. As Tom Novak tells us in this video, the next episode of snow is essentially coming in straight from the west. The result, however, is expected to be similar to past events -- a quick punch of snow that's forecast to accumulate to 2-4." 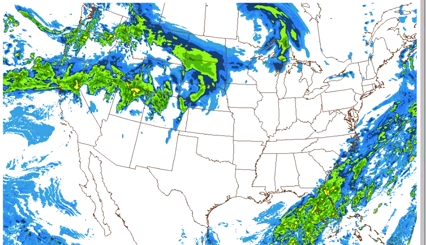 According to Tom Novak from Novak Weather, a menacing winter dish is about to be cooked up by mother nature. Tom details a "dumbbell" weather pattern which he thinks will cause blizzard conditions in a wide swath of Minnesota real estate beginning Sunday. Here's our latest video.

Grading Jan. 13-14 Storm (and what was Chris Shaffer thinking?)

It’s been a while since we’ve graded forecasters. In truth that’s because there hasn’t been much interesting weather (i.e., snowstorms) and because there’s been little forecaster variance. This time, however, we feel compelled to highlight the particularly poor forecast by WCCO’s Chris Shaffer.

Here’s an excerpt from Shaffer’s forecast on the 6 p.m. news last night on WCCO. He said that “most of us will see less than an inch.” He went against all others and consistent model data. It seems he looked at one rogue model solution and ran with it. With the 4.4” of snow that fell, we think that most viewers would call this a poor forecast.


While a bad forecast is one thing, coming out 24 hours later and implying it was just what you expected is harder to swallow. Here’s a video capture from a segment of his 6 p.m. weathercast from Tuesday night. There’s the clear implication that the storm was what he expected (“just a little snow) yet he actually brings forth reported totals that are in excess of the totals he’s trying to validate. And how can he continue to call this “not much snow” when it caused snow emergencies in both major metropolitan cities? The fact is that we received one of the biggest snowfalls of the season with 4.4” and much of the metro received 3-5”. That’s a solid snowstorm in most peoples’ books.

Not surprisingly, we have to give Chris Shaffer’s forecast an F. Here are our grades for the efforts of other local forecasters:

WCCO: F. A poor forecast and an even poorer follow-up self assessment.
KSTP: B. More aggressive than most with a 2-4” forecast, but not aggressive enough. Also emphasized 2-3" with "spots seeing 4".
KMSP: C. Too conservative at 1-3 inches.
KARE: C. Same as KMSP
NWS: B+. They were consistent in forecasting 2-4” and, appropriately, issued an advisory.
Strib: C. Todd Nelson’s 1-3” forecast was too conservative.
MPR: C. While noting forecast volatility, was too conservative at 1-3”
Novak Weather: A. Refer to this video (beginning at 11:45).

An Alberta Clipper seemed to be losing a bit of steam as the next snow "event" was on the doorstep. Here are a few forecasts we gathered on Monday evening:

You can view our new video with Tom Novak from Novak weather here.
Posted by Bill at 6:06 PM 22 comments:

How Cold Will She Go (Redux) 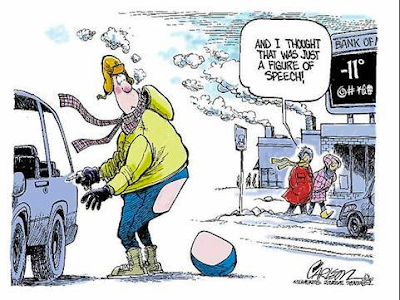 While Monday is still four and a half days away, forecasters were talking about the cold next week in rather fearsome terms. One forecaster said it would be the coldest air to visit the Twin Cities in 18 years.

What are your thoughts on the cold? Will this all really come to pass? And, will an otherwise thriving metropolis survive?
Posted by Bill at 7:23 PM 127 comments: