Grades for the Dec. 3-4 Snow Event

Here is our assessment of the Dec. 3-4 storm along with a few thoughts.
Overall
We think if most forecasters are honest with themselves, they’d say that this storm slightly exceeded predictions and had more energy in the second half of the storm than many expected. Although our perspective is intensely Twin Cities-focused, the storm was generally well predicted from an overall regional perspective with regard to storm timing and general trends.
Forecast Summary
As of Friday evening, approximately 24 hours before storm onset, the vast majority of forecasters predicted 1-3 inches. The only exceptions were the national forecasters, who predicted less. For our assessment purposes, we base the majority of our grading on forecasts made 24 hours before a storm. Once the storm is underway, it becomes more an exercise in nowcasting, which is an art in and of itself.
The Result
Snowfall at the Minneapolis/St. Paul airport was 4.4 inches and from a graphic provided by the National Weather Service, the best assessment would be to call this a 2-5 or 3-5 inch storm, depending on how wide you want you want to define the metro area. 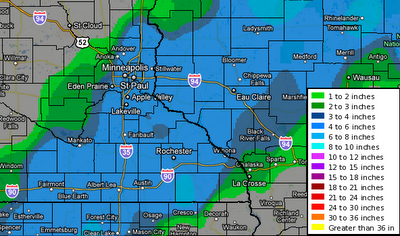 Grades
On the whole, we’d tend to give most forecasters a B with perhaps an A-/B+ to the National Weather Service who noted the possibility of 3-5 inches on Saturday morning, when all other forecasting outlets remained at 1-3 inches. Accuweather would rate a D for predicting .8 inches of snow.
A Note on Self Aggrandizement
Nobody can fault forecasters for making mistakes. They’re human and meteorology is an inexact science. While we try to provide a record of their predictions (against actual results), we also emphasize the communication aspect of weather forecasting and how forecast presentations fall on the eyes and ears of the average viewer drawing “reasonable man” conclusions to what they’ve heard.
While it doesn’t thrill us to watch a forecast where the met manages to avoid saying something that shows a connection to the viewer such as “if you watched us earlier, you know that we thought there’d only be one more inch to fall… but obviously, we ended up receiving more than that,” we can live with that. But what we find credibility-damaging is when the met falls over himself (or herself, should that be the case) patting himself on the back when in reality he missed the forecast!
On Saturday night, Fox9’s Steve Frazier commented over and over how the storm played out exactly as he’d expected (he even excused himself for patting himself on the back numerous times on the forecast). His presentation included snowfall amounts that he admitted were gathered when snow was still falling steadily and were likely to go higher. He noted that a measurement at the Fox 9 studio in Eden Prairie (where one would expect totals to be lower than in places like the airport, St. Paul and points east) revealed that about three inches of snow had fallen. The amounts he displayed reflected a 1-3 range of snow across the metro area. Blithely ignoring his comment that the totals were likely to go higher, he went on to use the incomplete estimates to make his case that he nailed his 1-3 inch forecast.
Minutes after his presentation, an official measurement from the airport came in at 4.2 inches, providing indisputable proof that Frazier’s 1-3 inch conclusion was off. Ensuing snowfall reports suggested that a truer metro-wide forecast would have been something like 2-4 or 2-5 inches. We find his presentation – sloppy at best and disingenuous at worst – the kind of thing that doesn’t sit well with viewers who watch faithfully.
Follow The Minnesota Forecaster on us on Twitter and Facebook for updates.
Posted by Bill at 1:57 PM