Who Saw This Heat Coming? One Forecaster ... Sort Of

Last Wednesday night, we noted the various forecasts for the extended outlook (which took us to Monday thru Wednesday of the current week). We were gobsmacked to see the forecast of one station and one forecaster stand out. Per the Monday through Wednesday period detailed below, KSTP was predicting temperatures considerably above the others, particularly for the middle day (Tuesday).

As everyone knows by now, the Twin Cities shattered a record, and KSTP's seemingly overly enthusiastic prediction of 92 for today (as of last Wednesday) turned out to off by double digits from the actual temperature.

Still, being off by 11 degrees passes as a sterling forecast in comparison to the prognostications from other forecasts, one of which (the Star Tribune forecast) was off by 27 degrees. Here's how far off the Twin Cities (and national) forecasters were six days in advance of today's record heat:

While KSTP deserves credit for predicting a heat wave that nobody else was able to see in the extended outlook, KSTP also detailed in its blog a day or two ago that temperatures would remain above normal for at least 10 days. That, it certainly appears based on a now-universally predicted chill down, will not come to fruition. Ah, the weather, ever hard to predict.

High Dewpoints Exaggerated by Some Forecasters
In several cases, a few weathercasters overpredicted dew points. The Strib called for dew point temperatures to be in the 70s for both Monday and Tuesday. Neither happened, and in fact dew points actually spent some significant time in the 50s. Fox also suggested that dew points would get into the 70s on at least one occasion. From our perspective, this was really not an especially steamy scenario. Warm and uncomfortable to be sure, but not as sauna-like as it could have been or as some forecasters would have you believe.

A Picture For Your Grandchildren
As of late Tuesday afternoon, here's a graphic you'll hardly ever see. The Twin Cities boasted the hottest temperature in the country. 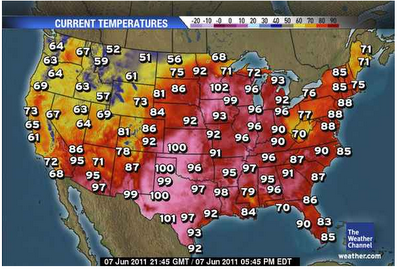 The smoky sunset that concluded the 103-degree day: 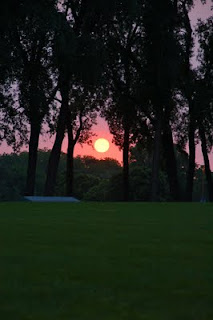