Twin Cities Schools Close Ahead of Storm - Appropriate for the Bold North? 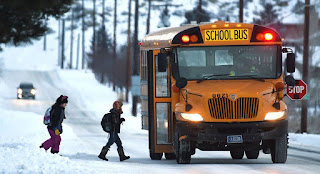 As I write this, it's approximately 12 hours before rain is expected to change to snow in the Twin Cities. Also as of this writing, Twin Cities school are closing like dominoes. It started with St. Paul Public Schools; other systems have followed. Even St. Kate's, whose students wouldn't have the same childcare complications to consider, announced it will be closed.

We all know that this is in response to what happened in St. Paul during the storm in late January, when some students didn't get home until well after the dinner hour. Vigilance is obviously appropriate but it's shocking that so many schools aren't at least waiting until the morning to decide.

From this weather enthusiast's perspective, a heavy snow doesn't appear to be a lock, particularly given the unknowns regarding precipitation changeover. And when you factor in the relative warmth of the last several days and the fact that temperatures are forecast to merely flirt within a degree or two of the freezing mark (meaning chemicals should work well), it just doesn't feel like the potential for a crippling storm (such as what we experienced on Jan. 22) is high enough to merit school closing the night before the event.

The real question is what this means for the future. Despite climate change, it's still going to snow in the Twin Cities. Traffic congestion will only get worse as the area continues to grow. And liability concerns aren't going to go away any time soon. Is it possible that this scenario will play out more often in the future? Will we look back on the Jan. 22 storm as some sort of a tipping point when an abundance of caution surpassed the we-can-deal-with-this attitude on which so many Minnesotans pride themselves?

Put more succinctly: is this still the bold north?
Posted by Bill at 10:49 PM