While most would agree the weekend forecast was a major bust, if you assess it from the perspective of last Monday's forecast for the weekend, it wasn't quite so bad. Fox had the closest temp forecast for Saturday (which was still 13 degrees off) while the NWS nailed Sunday's high. If only they'd quit while they were ahead! 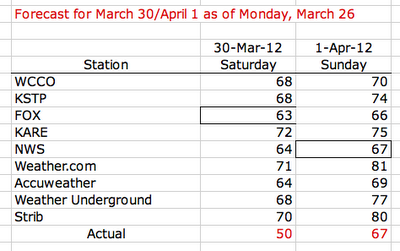 As of Monday evening, forecasters were not in agreement about warmth for the upcoming weekend. For Saturday, Fox predicted 63, nine degrees cooler than KARE. There was considerable spread for Sunday temps as well. Fox was again the lowest at 66 degrees while KARE was the warmest of the local forecasters at 75. Weather.com forecast a whopping 81 degrees for Sunday. 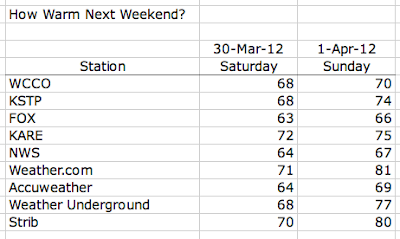