Dark Sky is one of several new apps on the market that seek to provide specific times for the arrival and departure of precipitation (we previously featured RainAware). We sought to learn more about the app and had the following Q&A with Adam Grossman, co-founder of Dark Sky. 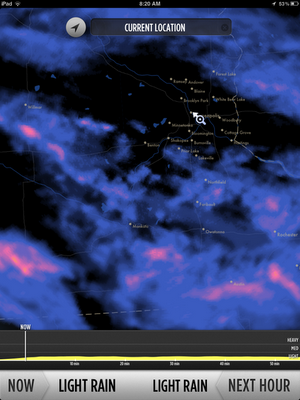 What are the differences between the iPad and iPhone versions?
They both have the same data, but the interfaces are different to reflect the difference in form-factor. On the iPad, for example, we show the radar map and future prediction on the same screen, whereas we split them up on the iPhone. Personally, I like exploring the radar on the iPad's big screen and use the iPhone to check the weather on the go.

Were meteorologists included in the development of the app?
Actually, no. My schooling was in physics, not meteorology, and the other two co-founders are both computer guys. The whole thing started as a side project a couple years back, just to see if something like this were possible. I got sick of getting stuck out in the rain, and decided to experiment with applying statistics and machine learning to the problem (since I lacked traditional meteorology experience). Against all odds, it seemed to work really well for prediction precipitation in the near term.

Is weather knowledge built in to the app or is it more an interpretation of the movement of cells on the radar?
We take a statistical approach, rather than using physical/meteorological models. So the predictions we make are based on how the particular storm -- and storms like it -- have moved and developed in the past.

What do you see as the advantage of your radar depiction (vs. traditional radar)?
For a lot of people -- especially those who aren't weather nerds and aren't used to looking at and interpreting weather radar -- conventional weather animations out there can be very confusing. Because the doppler radar stations only take new images every five to ten minutes, they tend to result in clunky, jerky animations that are hard to follow. So what we've done is take our prediction algorithms and apply them to the time periods in between the radar frames, allowing us to create smooth and fluid animations. It really makes it a lot easier to see how the storms are moving and changing, and where they're headed.

Have you tested the accuracy?
An important part of our statistical approach is that the system constantly monitors its own accuracy: Every time a new radar images comes in, we use it to compute the error of past predictions. Because of this, we can tell in real-time which storms we have accurate predictions for, and which ones we don't. We reflect this in the interface as a "wobble" in our graphs. The more wobble, the less confident in our predictions we are.

Are users more apt to be overwarned or underwarned about precip?
It depends on the area and the type of precipitation. Light, spotty, slow moving precipitation is the hardest for us to predict, so in those conditions you might get some light sprinkling that we didn't anticipate. On the other hand, radar images also have a lot of "noise" in them (i.e. regions that look like precipitation that actually aren't) so if we don't do a perfect job cleaning them up, it can lead to false-positives. Fortunately, as we gather more data, we're constantly improving both our cleaning and prediction algorithms.

Are we correct in assuming the window of projection is one hour?
Right now we're restricting it to a forecast for the next hour. We plan to expand beyond the hour in future app releases, as we improve our prediction capabilities.

Does the radar show the past hour of precip as well?
Yes. You can scrub back in time over the past 2 to 3 hours. On the iPad, there's a history button to load this past data (which will be clearer in an update of the app we have coming out in the next day or two).

Are there locations where the performance of Dark Sky is less reliable or precipitation patterns that are more problematic?
We're less reliable in places with off-and-on sporadic light rain that just sort of sits over an area all day: think Seattle. We're most accurate for stronger storms, such as thunderstorms and those nice cohesive squall lines you'll often see rolling down the plains.

What do you consider the strengths of your app?
Our goal was to make a weather app that was easy and fun to use for everyone, not just weather junkies. So we've put an emphasis on design, usability, and making the best radar visualization out there. I think that really sets us apart from the other apps out there.
Where do you see the most opportunities for improvement in future upgrades?
We have a big list of improvements we want to make, some minor and some major. One of our biggest priorities is a notification system: The app is only helpful if you remember to consult it, and I've personally been caught off guard by the rain because I just didn't think to check the app. So we want to build in notifications that will actively warn people when rain is headed their way.

Improvements to the underlying prediction algorithm are also a huge priority, of course. We're constantly improving things behind the scenes, and users should get the benefit of those improvements even without having to update the app.
Posted by Bill at 11:07 AM