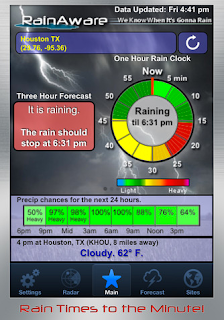 Scanning the wire recently, we learned of a new weather app that seemed both unique and practical. The goal of RainAware, currently available as an iPhone app, is to “predict to within minutes when precipitation will reach a user’s exact location, up to three hours in advance.” Knowing that weather can be challenging to predict, we were curious to learn more about this app and how it works (and no, we’ve not yet tried it).

We interviewed Ryan McGee of RainAware to learn more about the app and its capabilities. Here’s what he had to say:

Email ThisBlogThis!Share to TwitterShare to FacebookShare to Pinterest
Labels: RainAware