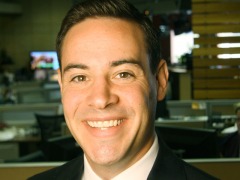 In our continuing series to help familiarize readers with Twin Cities weathercasters, Minnesota Forecaster met with Matt Brickman, WCCO weekend morning meteorologist and reporter, on the first record-breaking warm day in March. He spoke about his unique entrée to meteorology, early impressions of Minnesota, and the differences between forecasting for Minneapolis and Champaign, IL. Here’s what he had to say:

Being new to the Twin Cities and Minnesota since August, what are your first impressions?
I absolutely love it here. The city is so nice. I’ve grown up around cities like Boston, New York and DC and they’re bigger and they’re not as clean. This is very manageable, and everyone is so helpful. I’ve learned from my “Best of Minnesota” segments that Minnesotans love to brag about their state and they should. I love it and I have no regrets.

It sounds like your career path to becoming a meteorologist is a little different than others.
Yes, that’s true. I went to school to study broadcast journalism, thinking I’d be doing news. I got a job as the overnight news producer while still in college and then became a reporter. The station where I worked (in Champaign, Illinois) was so small they filled people in from all over the place. After about a year, my news director pulled me into her office, and said, “Matt, what do you think about trying the weather?” And I figured, “Well, if I can do everything in this building, they can’t fire me!” So I gave it a shot and I really loved it… right away. I like working without a script and in a medium that kind of allows you to have a personality. It just excited me more and I enjoyed it more than anything else I’d done in the newsroom.

While I subsequently went back to school to study broadcast meteorology, I still consider myself still a student and continue to further my weather education. One of the reasons I was so excited to work here was to work with guys that have been around a while and who really know their stuff. I still learn a lot from watching Mike Augustyniak put together a forecast. He has an incredible mind for science.

I know that many meteorologists talk about the tornado they remember when they were small as stirring their interest in weather, but when I was 13, I wanted to be on Sports Center. Although I didn’t catch the weather bug until later, I always loved math and science. I just never thought about it as a career until I did it for the first time. I love it!

In those days spent dreaming of becoming the next Stuart Scott rather than the next Jim Cantore, do you recall any meteorologists during your childhood?
When I was a kid there was a guy by the name of Hilton Kaderli at channel 3 in Hartford. It’s not so much that I remember watching his weathercasts, but I remember the name “Hilton Kaderli.” A perfect TV name.

Did you see yourself working in such a large market just a few years removed from college?
No. I feel incredibly lucky to be in Minneapolis at 26. This was my dream market when I was in Champaign. I figured I’d go from Champaign to a slightly larger market and then eventually end up here well into my 30s. I feel really lucky to be here and especially at CCO, which is such a legacy station with so many talented people – including meteorologists like Chris Shaffer and Mike Augustyniak, and others on the news reporting side. When I get to go out and do stories, they just make me look good.

What do you look for when you watch other forecasters?
When I watch another met, I like to see their personality. I like to see how easy they are to watch. I think if you can watch somebody for two and a half minutes, and you get the information you need and you’ve got a smile at the end, I think that’s great. I like to see how different mets across the market show their personality. Keith Marler does a nice job of that with Fox. He’s very good. I like Patrick Hammer quite a bit as well. And of course I like Chris. He has as good a personality as anybody in the market.

Except for the messy snow and ice storm at the end of February, precip in the Twin Cities has been way below normal since you arrived in August. Do you feel responsible?
Good or bad I don’t take credit or blame for any of the weather. But it’s funny. We’ll get a caller or an emailer every now and again with someone saying, “Hey, thanks for the nice weather,” or “Could we get a little rain?” Course I explain I’m just telling them about it and that I can’t do anything about it. But to be honest, if I could control it, I would have loved some snow. I love snowstorms. I love forecasting them. I get to be really nerdy and dive into BUFKIT (to determine possible snow accumulations). Love that.

It’s a Saturday morning and weather models have changed since the chief meteorologist’s show on Friday night. How much can you change the forecast?
We have the ability to forecast as we see fit. I know that at some stations there’s a chief meteorologist forecast and everyone else is expected to follow it. That’s not the case here at all. Everyone does their own forecast. Now when we have bigger storms we’ll come together and talk about it when we’re all here, but when you’re the one here, you’re in charge.

Do you have a preferred weather model?
Certainly not this year as most haven’t performed particularly well! I think I probably like the NAM (North American Mesoscale model) more than anything else. I might lean a little heavier on that than I do the GFS (Global Forecast System) or the RPM (Rapid Precision Mesoscale model). When we get a storm coming, I rely heavily on BUFKIT. We don’t have a preferred model but we do use the RPM for our shows. It pumps out data every three hours so you get more up-to-date information. But it can be way off, too, so you have to be careful with it.

How does the actual “weather show” in Minneapolis compare to the presentation you did in Champaign? Are there more/fancier graphic tools or weather models at your disposal at WCCO or is it essentially the same?
The tools at hand are definitely more sophisticated. Getting updated RPM data every 3 hours is a huge advantage - the “future radar” I was using in Champaign was only getting updated every six or 12 hours. It’s also nice to be able to do the show in HD – I didn’t have that in Champaign. Essentially, I have more real estate to use on a map – which is great now that I’m forecasting for an entire state.

What are some memorable storms that come to mind?
In Connecticut, I just remember a lot of snowstorms. The most memorable individual storm I recall was when I was in Illinois. A tornado went through my inlaw’s town about a quarter mile from their house and there were train cars out in the railroad tracks that were thrown about 50 yards out into this field.

What do you find most challenging about forecasting here?
The tricky thing about this market is that you’re forecasting for the whole state. That is such a challenge. The weather in northern Minnesota, and particularly the north shore of Lake Superior, can be very different than in the cities. When I worked in Champaign, the focus was on a much smaller region from roughly Springfield across to about Terre Haute. The Chicago market covered all of northern Illinois, essentially leaving us a strip across central Illinois to forecast.

Speaking of the Chicago market, what are your thoughts on Tom Skilling? Do you think his strong science approach would fly in other markets?
Personally, I love it. For somebody like me who understands that stuff, it’s really neat to watch. I don’t think he’s too “sciency.” Yes, he does talk a lot in science terms, but I think he makes it understandable enough so that if you’re watching at home, you can get it. There’s just not enough time for me to get into that level of detail with our standard weathercast being two and a half minutes. If there’s any rain at all, there goes 30 seconds.  And the 7-day forecast at the end takes another 20 seconds. Skilling must get four or five minutes. I’d like to be able to do some of that stuff but most people just want to know lifestyle weather. However, when we get snowstorms, we do have the time to expand coverage and get more technical.

How important is interaction with your viewers?
I love when there’s interaction with viewers, whether it’s what they’re thinking on a forecast or giving us snow totals. I think that’s where all this is going. Everyone can have a hand in the pot and help us tell a story. There’s no way that we can be everywhere anyway, so to have these weather spotters across the state helps. We welcome the helping hand.

Do you have any favorite weather apps?
I have eight weather apps on my phone right now - I'm a little obsessive about it actually. I’ve been scolded by my wife when we’re out to dinner or even on vacation and I’m tracking a storm on my phone. RadarScope is by far my favorite. It’s especially valuable in spring when we’re monitoring severe weather.

Switching gears to a fun, non-weather question, if you set your phone to random, what three items are most likely to play?
Well, I actually have a lot of podcasts, so something like NPR’s Fresh Air or CarTalk might come on. But musically, songs might pop up from the Black Keys, the Jackson Five or the Talking Heads.

Given that you’re a big sports fan and March Madness is beginning ... if you were to play bracketologist rather than meteorologist, who would you take in the NCAA tourney? And without Illinois (or Minnesota), who grabs your rooting interest?
UNC is my pick –so many talented players (Barnes, Henson and Zeller) that returned after an impressive year last year, they’ll be tough to beat. It’s usually a team with great guards that wins though, right? So, Mizzou would make sense, but I can’t pick them –blame it on an inferiority complex after going to the University of Illinois. My parents went to the University of Connecticut, and I grew up going to both men’s and women’s UConn basketball games. If I’m rooting for anyone, it’ll be the Huskies.

Like reading about the local forecasters? We've profiled KSTP's Patrick Hammer and another on Ian Leonard. We also assisted with a similar profile on Keith Marler for Weatherist.com. Look for more to come.

The Minnesota Forecaster provides analysis of both the weather and those who forecast the weather for the Twin Cities. For periodic updates, follow us on Twitter and Facebook.
Posted by Bill at 6:50 PM