Score One for the Outliers

Last Thursday evening (March 1), we took a look at a few weather outlets’ extended forecasts for the current week of (very changeable) weather. What struck us most were the forecasts of Weather Underground on Tuesday and KSTP on Thursday. Both forecasts stood out in marked contrast to all the others. Weather Underground’s (BestForecast) forecast high was 10 degrees higher than all others on Tuesday. Similarly, KSTP’s forecast high for Thursday was 8 degrees colder than Accuweather’s and 13 degrees colder than all others’. Odd, or so it seemed. But in the end, when Tuesday clocked in at mild 60 and Thursday registered a back-to-winter-like 37, the outlier forecasts were pretty much dead on. 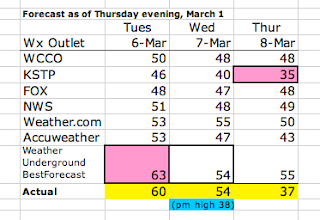 Here’s to the forecasters who aren’t afraid to stand alone and take risks. You keep life interesting, and sometimes, you’re the most accurate!
Posted by Bill at 9:10 PM