So what happened today? And what are the prospects of sunshine tomorrow? Here's what the NWS told us:
"Higher than today...but still some concerns. The problem today was a batch of high clouds on top of the lower stratus earlier today which likely limited the ability of the sun to dissipate the lower clouds somewhat. Also...the stratus was quite thick. We do expect clouds for tomorrow morning and we'll even have to watch out for dense fog in the morning. Don't expect full sun tomorrow...but it certainly looks like a partly cloudy scenario by the afternoon.
Update: As of Saturday early afternoon, Twin Cities forecasters were using the B word to describe today's forecast. Kudos to @NovakWeather for being the first to tell us it would stay cloudy and cool. 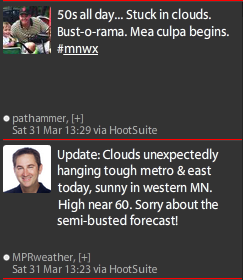 As of this Saturday morning, there was a huge disparity in forecasts for Saturday's high temperatures. Forecast highs ranged from the upper 50s to 74. Here was a sampling that we found. 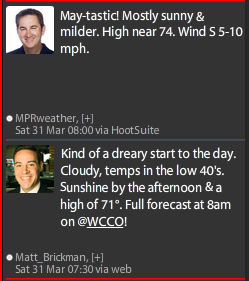