A Baseball Geek, A Weather Geek

OK, a little aside that weather geeks might get a kick out of ...

A recent article in Sports Illustrated analyzed a pitch called the cut fastball. Included in the article were funky "heat" graphs that depicted the difficulty hitters are having in hitting the increasingly popular and nasty pitch. 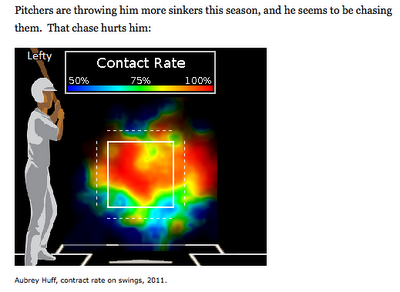 Per the graphic above, any weather geek would quickly conclude that the graphs looked nearly identical to radar images reflecting nasty thunderstorms and hook echoes, right? So what's a baseball fan/weather geek to do? How about write an article to Sports Illustrated? The graphic below reflects that the popular sports magazine does indeed have a sense of humor. (Note the letter that begins at the top of the second column.)