Fox9 has made a big deal promoting its newly released weather application for mobile phones. While the app has a few nice features (good radar, alerts and ability to mark favorite locations), there is a discrepancy between the application and the weather television presentation. 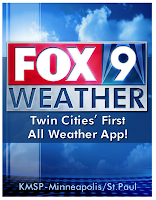 What seemed most curious is that the forecast temperatures and sky conditions don't match between the app and what's posted on the website (not to mention that both forecasts were a day light in being updated). For example, on Friday evening at 11:45 p.m., here's what displayed on the app and website:


Note that for Tuesday through Thursday the variance in high temperatures is considerable, with an eight degree difference on Thursday. There are also differences where the weather app icons show rain while the website icons show sun. It's hard for us to take a station's weather app seriously when there is such a difference.

Our guess is that the source for the app's weather forecast is not made by the on-air mets. The app appears to be produced by the WSI Corporation, which produces weather forecasts of its own through places like Intellicast.com. Fox needs to square this issue before it can expect its mobile phone viewers to take the new app seriously.