We've been meaning to post a small philosophical essay about the pros and cons of nowcasting, the practice of giving short-term updates on weather activity that's generally not considered forecasting. While that post will have to wait for another day, today's weather forecaster analysis wouldn't be complete without reviewing today's "nowcast" tweets of @JonathanYuhas. We're not trying to pick on Jonathan, but it sure seemed like everything he said turned out to be completely wrong. The following chronicles a night of forecasting-challenging weather juxtaposed with Jonathan's nowcasting tweets.

We begin tracking Jonathan's tweets about 4:45 p.m. as the Twins game was moving into the later innings.

While the quantification of a possible "25-minute rain" seemed overly precise, particularly since there was no guarantee the rain would even arrive, it was a nice little heads up, both for fans watching on TV and fans attending the game.

About 15 minutes later, Jonathan issued his next tweet, delaying the possible arrival time of a 25-minute rain to 5:30.

As 5:30 approached, Jonathan determined that the rain was breaking up, and called off the possibility of rain for Target Field. Notably, he stated that the storms WILL fire up over the next 7 hours (not "might" fire up):

Next, Jonathan decided it would no longer be a stormy night, mentioning the possibility of only light showers.

By approximately 8:45, Jonathan minimized the threat of rain even further, calling for the possibility of sprinkles at worst for the U2 concert-goers. He pronounced that the cooler airmass over the Twin Cities precluded the possibility of any severe storms.

But just as Jonathan seemed to kiss any chance of significant rain goodbye, things started to change. Shortly after that, the radar began to blossom. Light green echoes turned to dark green, and then quickly to yellow, orange and red. 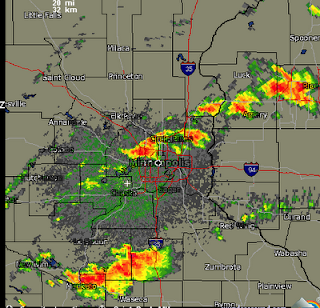 Jonathan took note of the changing radar and alerted concert-goers about the possibility that some rain and thunder could "graze" the U2 concert.

At about this time, 1" hail estimates were coming in from Brooklyn Park. The line of storms began to sag southeast and back-build to the west. At 9:49 p.m. the National Weather Service issued this special statement noting significant storm activity for the University of Minnesota, site of the U2 concert:

GUSTY WINDS OF 30 TO 40 MPH ORIGINATING FROM THIS STORM ARE LIKELY TO BE EXPERIENCED IN MINNEAPOLIS...ST. PAUL...AND LOCATIONS IN BETWEEN THE DOWNTOWNS...INCLUDING THE UNIVERSITY OF MINNESOTA.

Shortly thereafter, reports of torrential rain and cloud-to-ground lightning were reported at the University of Minnesota's TCF Bank Stadium. At 10:19 p.m, here was the Weather Underground radar depiction: 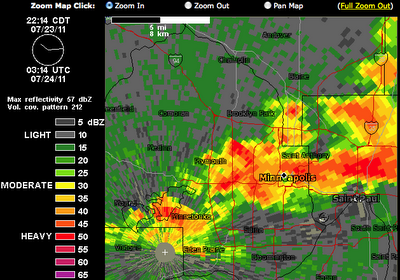 Unfazed by his missteps that seemed to occur with every tweet, Jonathan, the consummate professional, plowed forward, giving his followers one last concert update:

A final tweet, five minutes before 11 p.m., pronounced the storm still sitting over the U of M:

In fairness, other forecasters noted some of the same general trends, but their tweets weren't quite so precise or quite so wrong. We do think Jonathan deserves credit for actively tweeting in the first place, as it reflects his passion for what he does (and an understanding of the emerging importance of social media in weather communication).

Still, tonight's events raise a few questions: Is nowcasting, particularly in a convective summer environment, really such a good thing? And is too much credence given to every turn of the radar, sometimes at the expense of seeing the big picture of possibilities?
Posted by Bill at 12:40 AM