As of Monday morning, forecasters were predicting snow for midweek that could be more than just conversational. We'll track the forecasts later today.


Looking for a little weather education? Here's our weather instructional video for this week's unfolding situation from Tom Novak at @NovakWeather. 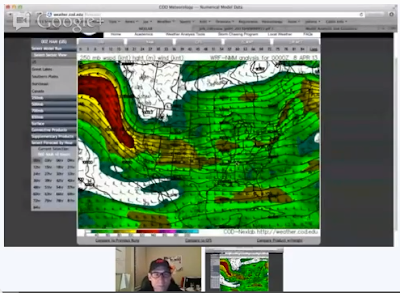 Several have asked us to include Tom Novak's response as to why he thinks the storm may track further north than others are forecasting. Here is his response (copied from a comment in the previous blog post):


I can't speak for those forecasting at the MPX NWS (They have several shifts hence different forecasters), but my M.O. with weather forecast is more of a "top down" approach rather than vice-versa. Let me explain.

When I look at model data, I almost always look at the 250mb level first (Jet Stream level) before drilling lower in our atmosphere. This is especially crucial when viewing a storm that is more than 48 hours out. Once I get a good feel for the upper-level dynamics, then I drill deeper into the mid-levels before finally ending my viewing on the surface features.

It is safe to say that I place much more weight on the mid & upper level dynamics than I do with the surface features especially when forecasting more than 24 hours in advance. Hell, I never trust surface weather maps including QPF (precipitation forecasts) until approx. 36-48 hours before the onset of a storm.

I've learned my lessons the hard way by placing way too much emphasis on surface features, including QPF, too early in the game. This is a trap that many weather forecasters run into especially those with little time on their hands and/or who are simply too laze to view all atmospheric levels.

With the impending storm for this week, I'm pretty confident that the storm will track further north than what some forecasters are predicting. There are several reasons why I'm going with this scenario:

1.) Jet stream dynamics support a further north solution with the mid & upper level lows. All computer models are on board with this. Remember, even though the surface low may track well south of MN through IA, MO & IL, the upper level support will linger well NW of the surface low over so. MN.

2.) Strong forcing at the 850mb, 700mb & 500mb levels will tend to keep the precipitation shield established well north of the surface low.

3.) I can't believe I'm still saying this, but Arctic air is still alive and well in the northern U.S. including much of the Upper Midwest & MSP metro.

Put all of this together, and you have a mess on your hands for much of MN. I hope this all makes sense.